The student winners of the 2012 Demetriades - Tsafka - Kokkalis Prizes were announced at a special luncheon with the Demetriades - Tsafka – Kokkalis family. Philip Romero received the prize in Biotechnology for his work on developing statistical models of proteins with Frances Arnold. Michael Mello was the recipient of the prize in Seismo-Engineering, Prediction, and Protection for his work with Ares Rosakis on developing a novel methodology for identifying the unique ground motion signatures of supershear earthquakes. Leslie O’Leary received the prize in Environmentally Benign Renewable Energy Sources for her pathbreaking work on the properties of semiconductor interfaces with Nate Lewis and Bob Grubbs. This year there were two winners for the prize in Nanotechnology. One winner was Andrew Jennings for his experimental and modeling work in nanomechanics with Julia Greer. The other winner of the Nanotechnology prize was Jordan Raney who has worked with Chiara Daraio to develop new chemical synthesis methods to control the properties of carbon nanotubes. 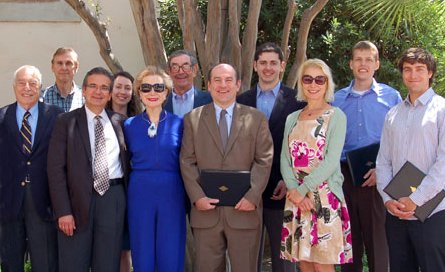