Michael Robert Hoffmann, James Irvine Professor of Environmental Science, and his team of graduate students Asghar Aryanfar, Clement Cid, Kangwoo Cho, Daejung Kwon, and Hao Zhang, along with post doctoral scholar Yan Qu have won the Reinventing the Toilet Challenge issued by the Bill and Melinda Gates Foundation. Their winning proposal was to build a toilet that uses the sun to power an electrochemical reactor. The reactor breaks down water and human waste into fertilizer and hydrogen, which can be stored in hydrogen fuel cells as energy. The treated water can then be reused to flush the toilet or for irrigation. [Caltech Feature] [CNN Ideas] 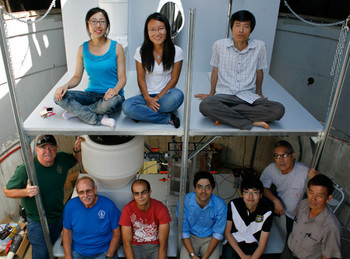 The Caltech team (top left to right - Hao Zhang, Yan Qu, Daejung Kwon - bottom middle from left to right - Clement Cid, Asghar Aryanfar, and Kangwoo Cho, along with members of the Caltech facilities team) in front of the toilet system, which includes a Western-style toilet, a urinal, and a squat toilet.