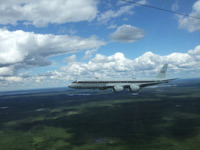 Paul Wennberg, the R. Stanton Avery Professor of Atmospheric Chemistry and Environmental Science and Engineering and director of the Ronald and Maxine Linde Center for Global Environmental Science, and John Seinfeld, the Louis E. Nohl Professor and professor of chemical engineering, have shown that biogenic emissions—organic carbon compounds given off by plants and trees— affect air quality. Wennberg states that, "if you mix emissions from the city with emissions from plants, they interact to alter the chemistry of the atmosphere." Seinfeld adds, "particles in the atmosphere have been shown to impact human health, as they are small enough to penetrate deep into the lungs of people. Also, aerosols impact Earth's climate through the scattering and absorption of solar radiation and through serving as the nuclei on which clouds form. So it is important to know where particles come from." [Caltech Press Release]