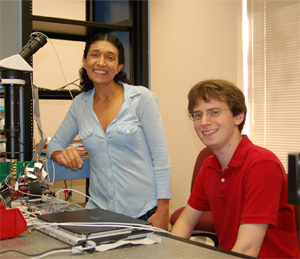 Protecting the Brain with Infrared Light

Undergraduate student Jeff Sherman spent the summer working with Electrical Engineering Professor Azita Emami-Neyestanak on a novel, noninvasive early treatment for traumatic brain injury. Sherman was a Summer Undergraduate Research Fellowship (SURF) student and winner of the 2012 Arthur Rock SURF Fellowship. They worked on an approach that uses minimally invasive infrared (IR) light and intravenous medications to diagnose and treat patients during the “golden hour” right after the brain injury occurs. The aim is to prevent the long-lasting sequel of secondary brain injury by locally delivering drugs to the injured area. In concussions and other types of traumatic brain injury, the blood-brain barrier is transiently disrupted in the region of the injury; the team takes advantage of this by targeting delivery of therapeutic agents to the site of injury. The long-term goal of the electrical engineers on the team is to develop a wearable and portable device with optimum arrays of IR transmitters and backscatter detectors. Such a device can be carried by emergency and combat medics and can be used in hospitals and sports stadiums. 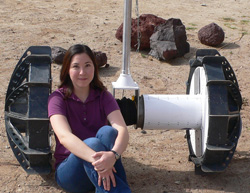 Melissa Tanner (SURF ’08), a mechanical engineering graduate student and student lead for the Keck Institute for Space Studies (KISS) mini-program Tools and Algorithms for Sampling in Extreme Terrain, mentored five 2012 Summer Undergraduate Research Fellowship (SURF) students who developed instruments and tested various aspects of scoop sampling on the extremeterrain rover called Axel. The rover could one day be used to explore the moon, Mars, or an asteroid. The Caltech faculty mentor to the project is Joel W. Burdick, Richard L. and Dorothy M. Hayman Professor of Mechanical Engineering and Bioengineering, who is also part of the Caltech and Jet Propulsion Laboratory team developing Axel.

Michael Hoffmann, the James Irvine Professor of Environmental Science, and his research team were awarded a $100,000 prize by Bill Gates for their first-place finish in the Reinventing the Toilet Challenge research initiative sponsored by the Bill and Melinda Gates Foundation. Their winning prototype and concept employs a toilet system that uses the power of the sun to drive an electrochemical waste treatment reactor. The reactor breaks down water and human waste into fertilizer and hydrogen, which can be utilized in hydrogen fuel cells to produce electricity. The treated water is then recycled in a closed-loop system to flush the toilet in preparation for future use.

To learn about their self-contained photovoltaic-powered domestic toilet, visit eas.caltech.edu/news/489.

Redefining the Limits of Photovoltaic Efficiency 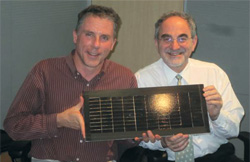 Since 2009, the Light-Material Interactions in Energy Conversion Energy Frontier Research Center (LMI-EFRC) has established itself as a national resource for fundamental optical principles and photonic design for solar energy conversion. The center, directed by Professor Harry Atwater, is creating new optical materials for high-efficiency photovoltaics and has fostered a world-leading capability for fabrication of complex 3-D photonic nanostructures and light absorbers. The LMI-EFRC team consists of expert researchers including faculty, postdoctoral scholars, and students from Caltech, Lawrence Berkeley National Laboratory, and the University of Illinois at Urbana-Champaign. Their discoveries include demonstrating the first optoelectronically active 3-D photonic crystal; utilizing the entire solar spectrum in photovoltaics via up-conversion, down-conversion, down-shifting, and spectrum splitting; designing architected silicon microwire arrays for enhanced solar absorption; and emphasizing the importance of light emission in photovoltaics, which led to Alta Devices’ world-record–breaking solar cell.

To learn more about innovative research at the LMI-EFRC, visit lmi.caltech.edu.

Transforming Our Knowledge of the Quantum World

The Institute for Quantum Information and Matter (IQIM) at Caltech is the newest of the National Science Foundation’s 11 Physics Frontiers Centers. It is charged with the responsibility to develop and sustain outreach efforts to the scientific community and the public. Have you ever wondered what makes a theoretical physicist tick? Does looking at the quantum world change how you see other things? Through the blog Quantum Frontiers, IQIM scientists, grad students, and participants in the summer research program share varied perspectives (not limited to science). IQIM is also supporting two conferences in January 2013, one for undergraduate women in physics and the second for youth in connection with TEDxCaltech: The Brain.