Investing in Engineering and Science

We Can’t Afford Not To! 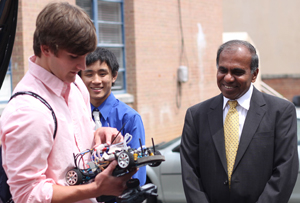 Dr. Subra Suresh is a distinguished engineer and professor and is the current director of the National Science Foundation (NSF). His academic homes have included the Massachusetts Institute of Technology (MIT), University of California, Berkeley, Brown University, and Caltech, where he was the Clark B. Millikan Visiting Professor at the Graduate Aerospace Laboratory and Division of Engineering and Applied Science Moore Distinguished Scholar.

Prior to his NSF appointment, Suresh served as dean of MIT’s School of Engineering. He is currently on leave from the Vannevar Bush Professorship of Engineering at MIT. His innovative experimental and modeling work with nanoscale materials, which connects cellular nanomechanical processes and human disease states, has helped quantify the onset and progression of devastating diseases such as malaria. His academic research has won him a number of awards over the years, including election to the U.S. National Academy of Engineering, the U.S. National Academy of Sciences, and the American Academy of Arts and Sciences. More recently, he has been awarded the prestigious Timoshenko Medal from the American Society of Mechanical Engineers (ASME). ENGenious interviewed Dr. Suresh to learn more about the challenges and opportunities facing engineering and science in the United States.

ENGenious: What is the greatest challenge facing engineering and science in the United States?

Suresh: For the last half-century, the United States has been considered the undisputed leader of global innovation. Despite an ongoing economic crisis, maintaining America’s leadership role is critically important. Many other nations’ economies are also suffering, but nevertheless they see engineering and science investment as the ticket to innovation and prosperity. For the last decade, other countries’ increased rate of funding has been significantly more than ours. If our funding reductions continue for several years, we’ll pay a very heavy price. Our second and third challenges have occurred in the last couple of decades. We are in a global competition for talented scientists and engineers. We will remain an innovation leader if we can continue to attract and keep top talent from all over the world. And our aging infrastructure—experimental facilities for physical sciences, for example—need updating, which is expensive. By building newer infrastructure, other countries can leapfrog technologies.

ENGenious: Despite the economic challenges we are facing, NSF has received strong support from Congress. What do you think is fueling this success?

Suresh: At times of tight fiscal constraint, there’s often a flight to quality. In past economic crises, strong research universities have actually seen increases in research funding. There is general awareness that global leadership in technology and innovation directly depends on the quality of a country’s research and education in science and engineering. In this area, NSF plays a key role, and so I’ve been making the argument that now is the time to increase support—not because it’s self-serving, but because the data support it. Although we see more competition from other countries, engineering and science funding for basic research carries no political agenda; even in periods of global unrest, international cooperation in research continues.

ENGenious: Why did you choose to serve as director of NSF?

Suresh: A continuous connection to education, research, and the political process makes NSF a very unique institution. As its director, I deal with researchers, educators, young scientists, students, and administrators in about 1,800 institutions across the country, engage in numerous national and international activities, and enjoy access to the global scientific community. 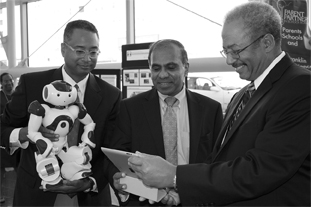 ENGenious: What do you hope to accomplish as NSF director?

Suresh: Though resources are tight, with clear strategies and careful leveraging, we have launched a number of new ideas and initiatives. For example, some of our best practices have been elevated to agency-wide levels, such as the Career-Life Balance Initiative, a ten-year plan to provide greater work-related flexibility to women and men in research careers and facilitate reentry after family leave with minimal loss of momentum. We received strong encouragement for this initiative from the White House, which is concerned about the importance of supporting and retaining women and girls in STEM (science, technology, engineering, and mathematics) careers.

Another example is our Integrated NSF Support Promoting Interdisciplinary Research and Education (INSPIRE), which expands on NSF’s existing interdisciplinary work. If a young university researcher has an idea that doesn’t fit into established funding pockets or traditional disciplines, we can nurture and sustain support for that idea through this new initiative. INSPIRE encourages agency-wide, cross-disciplinary collaboration and co-funding, so that each participating program office provides only a fraction of the total cost, which is then centrally matched. I know by experience that migration from one field to a seemingly unconnected field is possible. Ten years ago, I went from mechanical engineering to microbiology and infectious diseases.

A third example is on an international scale. We recently hosted a Global Summit on Scientific Merit Review and launched the new Global Research Council (GRC). Participants included research council heads from 47 countries—representing both developed and developing nations. GRC seeks to develop better harmonization of global science through which all scientists can benefit.

Other programs where NSF has made major strides during the past year include the NSF Innovation Corps (I-Corps), which was launched to maximize the impact of NSF-funded basic research discoveries, and several international collaborations for American scientists facilitated through the Science Across Virtual Institutes (SAVI) initiative.

Thus, NSF can provide leadership globally, nationally, and locally with the goal of moving the boundaries of knowledge in every field of engineering and science and related education. I’ll be very satisfied if we can build on last year’s momentum and connect on all these levels during my tenure.

ENGenious: You’ve stated that “good science anywhere is good for science everywhere.” Why is this approach important?

Suresh: I have a caveat to that, which is good science must be practiced in an open and transparent way; we should publish openly, share resources, and work together through a proper peer review process along with an infrastructure that ensures research integrity and respect for intellectual property. Basic science requires verification— it must be independently reproducible. The more people that do that, the better it is for science. When you bring diversity to science— that is, geographical, cultural, and ethnic—the quality of the science is greatly enriched.

ENGenious: You’ve spent time at both Caltech and MIT. Can you speak to their differences, similarities, strengths, and weaknesses?

Suresh: They are mainly different in size and scale. I was Dean of Engineering at MIT, which is the largest of its five schools. MIT engineering is 50 percent larger than all of Caltech in terms of number of faculty. Caltech and MIT are both very powerful. Each has its own culture, its unique flavor; yet each has been extraordinarily influential in its own right. Caltech is verdant and colorful; the MIT campus is part of an urban environment. MIT’s size gives it the advantage of a bigger footprint, not only in engineering but also in other areas from political science to management to the humanities. Caltech’s advantage is its small size. Demarcation between divisions or departments is less, so it’s easier to move across campus. I know that Jean-Lou Chameau, President of Caltech, met with each and every faculty member after first arriving on campus. So the interaction between individual faculty members and senior administrators is much easier, and conducive to a more family-like atmosphere. The same is true with student interactions, which are more personal.

ENGenious: What did you learn from the time you spent at Caltech? 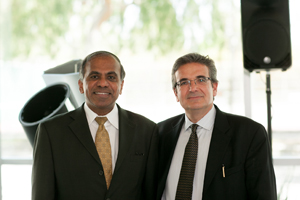 Suresh: Caltech has always been a very scholarly place but with a relaxed atmosphere—a fun place. It is a place that I have known through many visits and many people. Ravi (Guruswami Ravichandran) was a student in one of my classes. I have known Ares Rosakis since the 1980s, as well as Michael Ortiz and Wolfgang Knauss, since the mid-1980s. What have I learned? I learned that sometimes serendipitous things work very well. For example, I was at the Red Door Café with Ares more than ten years ago. We realized we both had patents on something that we could do jointly. We actually went from the Red Door to the Caltech Office of Technology Transfer, and that coffee hour formed the basis for a new Caltech patent on coherent gradient sensing, or CGS. Now Caltech has several patents in this area, and Ares and I jointly filed patents with some Caltech postdocs and MIT students. A real collaboration, and another lesson I learned: how two institutions can work very well together.

ENGenious: What is at stake for engineering and science during the 2012 election?

Suresh: The importance of focusing on basic research, education, and innovation generally takes a secondary or tertiary role in the political debate compared to other topics. But we all need to understand that we cannot afford not to support innovation through research and education in engineering and science.

ENGenious: What engineering and science questions should we ask of the individuals running for office?

Suresh: What is their perspective on the importance of science, engineering, research, and education for the twenty-first century? All citizens will need a basic level of expertise to thrive in any profession. Our communication tools are increasingly sophisticated and require us to think more quantitatively even in our daily lives. A strong commitment to education at all levels will prepare us at the very least for survival, and hopefully for success, in stiff global competition. The question will be: How will our elected officials help society evolve in that direction?

Subra Suresh is Director of the National Science Foundation (NSF).