A New Perspective on the Complex World of Water Management

John Hall is Professor of Civil Engineering at Caltech. From 1980 to 2005, his research interests included earthquake engineering, structural dynamics, strong ground motion, finite element modeling, and earthquake reconnaissance. He served as Caltech’s Dean of Undergraduate Students from 2005 to 2010 and then spent a sabbatical year in Sacramento, California, where he immersed himself in a new field of study: water.

ENGenious: Why did you take a sabbatical to go to the California Department of Water Resources in Sacramento?

Hall: After five years as Dean of Students, I wanted to get back into academia but try something different. I always had an interest in water, so I sought out a position with the Department of Water Resources, the agency that manages the California State Water Project (SWP), the nation’s largest state-built water development and conveyance system. It provides water for 25 million Californians and 750,000 acres of irrigated farmland. Immersing myself in this way helped me transition into a new area of study.

ENGenious: Tell us more about the California SWP.

Hall: Built in the 1960s, the SWP has a system of reservoirs, aqueducts, power plants, and pumping plants that store water and distribute it to suppliers who deliver it to two-thirds of California’s urban population as well as several large irrigation districts. In Southern California, we have two other aqueducts that deliver water—one, owned by the City of Los Angeles, traverses the eastern Sierra up to the Mono Lake Basin.

A third one is owned and operated by the Metropolitan Water District that taps the Colorado River. I’m interested in learning more about all three of these, not only from an engineering perspective but also because of the environmental, legal, and political issues that may represent some threat to our water supply.

ENGenious: What are some examples of such issues?

Hall: In the Sacramento-San Joaquin River Delta, some fish populations have become reduced to near extinction levels, and some people blame this situation on the large amount of water pumped out of the delta by the SWP (as well as a similar federal water project) for shipment south via the California aqueduct. The Endangered Species Act allows for lawsuits, and the judicial system has the power to shut down the whole water system if there aren’t safeguards in place. A current proposal to protect delta wildlife involves building a new tunnel system that takes the water out much farther upstream. While in Sacramento, I worked on feasibility studies for this project, which actually consists of two tunnels, each 100 feet underground and about 33 feet in diameter, 35 miles long. It would take about ten years to construct, with initial costs on the order of $12 billion. Fish and marine biologists are working in concert with hydraulic engineers to determine the consequences of such a project. They’ve constructed a mathematical model of the entire delta—flow patterns, salinity, temperature, oxygen content, whatever the fish need to survive—and are using it to access how the water extraction affects the whole ecosystem. Hopefully the project will not only benefit fish, it will increase the reliability of our water supply, which is presently vulnerable to earthquakes, floods, and future rise in sea level. Such events could destroy the levee system in the delta, flooding our aqueduct with salt water. 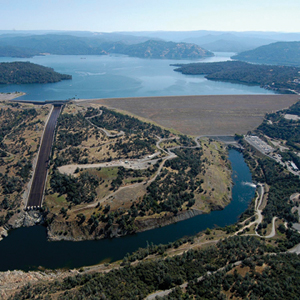 It’s a very interesting mix of scientific and engineering problems with legal and political issues, and of course the environment is at the middle of all of it. Take, for example, the 100-year-old City of Los Angeles aqueduct that diverted the source of water that fed Owens Lake, which eventually dried up. Since 1928, that dry lake bed—100 square miles—is the largest source of particulate air pollution in the country. To abate the pollution, almost 20 percent of the capacity of the aqueduct (enough water for about a million people) is now being returned to the dry lake bed just to keep the surface moist so dust doesn’t form. Additionally, another 15 percent of the aqueduct capacity is now being returned to Mono Lake to protect it from a similar fate. Mono Lake is a crucial stop-over for migrating birds. Because of these and other environmental issues, the Los Angeles aqueduct is delivering only about half of its capacity. But people shouldn’t have to develop lung cancer so others can have water, and the wildlife deserves protection. It’s interesting that after 100 years of transporting water, we are still struggling to find a balance.

The Colorado River water is even more complicated, since seven western states share this resource. The Department of the Interior decides on each state’s allotment. Dams have been constructed and huge reservoirs hold much of the water so that year-round access to water is possible. But as the upper-basin states start taking their full share, California has to make do with less water, which creates tension between cities and farms. Some water transfers from irrigation usage in the Imperial Valley to urban usage in Los Angeles and San Diego are already starting to dry up the Salton Sea. The state is currently working on a plan to keep the Salton Sea from turning into another Dead Sea, at a cost of many billions of dollars. The Colorado River aqueduct was built in the 1940s, and yet we’re still dealing with these problems.

So I find the intricate legal, environmental, and political issues and complexities of all three of these systems fascinating.

ENGenious: As a civil engineer training future generations of engineers, how do you effectively address the complexity of these kinds of issues?

Hall: For the first time in quite a while at Caltech, I’m teaching a course in hydraulics—how water flows under various conditions, such as canals and rivers. But to operate in the world I just described, one needs to also understand water chemistry and environmental biology, and be well versed in all the applicable laws, such as environmental protection legislation. I intend to focus on improving the hydraulics course, then add some environmental fluid mechanics, and ultimately expand into related legal, political, and environmental areas, and even sociology.

ENGenious: What a good example of how engineering can have a strong societal impact!

Hall: Yes. Everybody needs water. But the problems related to water are complicated, and we really need to be smart about the future. Maybe we shouldn’t be playing by the same old rules. To keep the water flowing and maintain harmony with the environment, we need to step back and take a global approach—and to work together. I’m not sure that we can really engineer our way out of the situation that we’re in now. I’d like to see us look at the entire picture and start over. A lot of it comes back to whether water is a public resource or something that can be privatized. Certainly there’s a role for government in sorting it out. I’d like us to rethink the whole scheme of water rights, how to divide up the water between cities and farms, and still consider water conservation technologies.

A lot of water is wasted; if we continue growing as we are, our resources will not meet our needs. We can make progress with technology—water recycling and desalination are two emerging areas where science and engineering could help. But looking ahead, especially when you factor in the effects of climate change, the three water systems I’ve described still need to reach a steady state—a balanced state.

One of my ambitions is to write a non-technical book about water that offers a clear explanation of where we’ve come from, where we are, and where we need to be with these issues. This puts me in the social science arena, since water impacts economics, political science, law, and the environment. But I also have the advantage of understanding ground water, how canals work, how pumping plants work, what the energy costs are, and so on. So maybe I can offer new insight, a fresh perspective.