Bringing Academia to the Forefront of Space Research 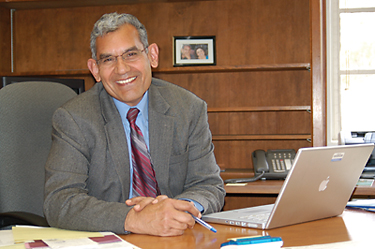 In the rapidly evolving world of science and technology, isolation is suicide. Both Caltech and the Jet Propulsion Laboratory (JPL) know this well, which is why JPL continually looks to Caltech for the next generation of technological innovation to fuel future space missions. Collaboration between these institutions has been on-going in all kinds of ways since the founding of JPL. In fact, the origins of JPL can in part be traced back to the rocket work of GALCIT students in the 1930s, under the leadership of Theodore von Kármán.

The two institutions recently highlighted the importance of collaboration by creating a new position which provides a formal research and technology liaison. Filled by a GALCIT alumnus, Dr. Virendra Sarohia (PhD '75), this position is formally named Technical Assistant to the Chief Technologist, and resides in the Office of the Chief Technologist of JPL. The Chief Technologist of JPL is yet another GALCIT export, Paul Dimotakis (BS '68 MS '69 PdD '73), John K. Northrop Professor of Aeronautics and Professor of Applied Physics. JPL seeks partners to bring innovative contributions to what the Lab does best, one-of-a-kind missions. Caltech, with its emphasis on fundamental science and technology, has always been a perfect partner for JPL. In fact, the culture of JPL is deeply intertwined with the culture of the campus, uniquely so for a NASA lab.

From the vantage point of campus, there are enormous benefits to having JPL in your backyard. As Sarohia explains, "We expose the students to something real out there. Not all engineering schools have that. Space missions offer many engineering challenges—just name a discipline in engineering, and you will see it is required for spacecraft development: fluid and solid mechanics, materials, navigation, electronics, control, everything is there. It's like a candy shop."

The Divisions of Physics, Mathematics, and Astronomy, and Geological and Planetary Sciences have had long-standing connections with JPL through missions; but the number of collaborations between the Division of Engineering and Applied Science (EAS) and JPL was approximately twice larger than other divisions at Caltech in fiscal year '06. We are working on fundamental, nascent problems, that are generally not in the public spotlight, but whose results can form the basis of key mission technology developed years later. For instance, the collaborations of Professor David Rutledge (Kiyo and Eiko Tomiyasu Professor of Electrical Engineering and currently EAS Division Chair) with Dr. Sander Weinreb of JPL in microwave antenna technology have been outstanding. The Caltech experience as the world leader in array technology has fostered JPL development and acceptance by NASA of array technology for the next-generation deep space communication network.

On campus, Dr. Sarohia is literally centered in EAS, with his office on the third floor of Thomas. One of his very first action items as liaison was to meet with Richard Murray (Thomas E. and Doris Everhart Professor of Control and Dynamical Systems), then Division Chair, and the Division's steering committee. Murray asked Sarohia to pay close attention to (Theodore von Kármán Professor of Aeronautics and Mechanical Engineering and Director of GALCIT) Ares Rosakis's vision for a new master's program in aerospace engineering. "I spent lots of time with Ares developing the new aerospace masters program and I am very proud of it. The program resides in GALCIT and is multidisciplinary—we have remote sensing being taught, space propulsion, space optics, space structures, control, fluid and solid mechanics. It was exciting for me to help Ares and the GALCIT steering committee in the initial stages."

Starting in 2006, six JPL technologists became involved in the teaching of space science engineering courses. "As they are teaching, they are interacting with a bright pool of students. They are also looking for opportunities. They are kind of JPL ambassadors that can open up the door. One instructor has 10 or 15 students. Just imagine how many connections are made. You have to remember that each student has a campus faculty member as an advisor. And so we get campus faculty along with students interacting with JPL. That's a very rich source of connections."

"I am seeing lots of interest in the hands-on challenges of spacecraft engineering as part of graduate and undergraduate projects, and we are currently discussing a pilot project with Mechanical Engineering that would enable undergraduate students to do a senior thesis with a JPL co-mentor."

Sarohia has been working at JPL since earning his PhD at Caltech in 1975. "The first half of my 32 years I was a researcher, interacting with campus very actively. There were students that came and worked at JPL in my group, in fact, a couple of them did their PhD in my group. Mory Gharib [Hans W. Liepmann Professor of Aeronautics and Professor of Bioengineering] was one of them." Later Sarohia got into space microelectronics, sensors, and eventually, management. In addition to his new role as liaison, he is a NASA program manager for the Long-Wavelength Detector Array Program. He is able to carry out his new responsibilities particularly well because of this long immersion in both the Caltech and JPL spheres. On fostering successful collaborations he says, "It is a contact sport. Creating good marriages on both sides of the aisle is the key to success. Two people have to really like the technical challenge—and they have to like each other so they can work together."

JPL reviews the research collaborations between campus and JPL on a regular basis. Over 250 science and technology collaborations were reported in 2006, with funding ranging from about $10,000 to several millions per collaboration. These exciting collaborative research efforts are characterized by the synergy of notably different talents adding a new dimension to the unique educational experience enjoyed by Caltech students, and lending JPL programs the fresh perspective of burgeoning young minds.

There are obstacles though. Post-9/11 regulations from the State Department "have not been very conducive to openness" Sarohia remarked. While the regulations are intended to protect U.S. interests and technology, they have had side effects: publications, presentation, and even people have to be "cleared," creating logistical barriers to the free flow of information that is the hallmark of academia. Moreover, JPL Director's Research Discretionary Fund (DRDF) seed funds for new initiatives are heavily oversubscribed. Combined with the general decrease of NASA technology development funds, many new JPL-campus interaction opportunities are lost. But Sarohia sees these as challenges to be solved, logistics to be negotiated.

Sarohia exudes a confidence and optimism that both organizations can help each other thrive, and he is devoted to that effort. "This is a dream job. I enjoy just the very fact that I work with younger people with limitless energy, and my goal is to reflect that energy into as many positive directions as possible."