Teaching at the Intersection of Science, Engineering, and Business

by Kenneth A. Pickar 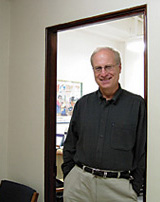 One of the many delightful things about teaching Caltech students is that you don’t have to guess what interests them—rather they tell you. There are two areas I would like to discuss where this has happened to me. One is the subject of entrepreneurship; the other is the subject of building products appropriate for the developing world. The fact that the first subject was started in the late ’90s and the second in the past year says something about the zeitgeist of these periods. In the late ’90s students wanted to be entrepreneurs—how hard could it be? They still do, but the fainter hearts have gone on to seek other pursuits. Now there is a sense that the world is so seriously divided between haves and have-nots that it is incumbent upon the former to address the issues of the latter. Not a new thought, but one that is gaining increasing resonance.

But let me start a little earlier. My career has been in science: liquid helium physics in school and solid state physics (of the device sort) at Bell Labs, followed by management stints at Bell Northern Research, GE Corporate R&D and AlliedSignal (now Honeywell). At this last enterprise, among my duties, I was the Caltech Campus Representative. I had an opportunity to meet students as potential employees and could follow their early careers after they joined the company. I noticed that although they were, of course, excellent engineers, Caltech graduates did not have the sort of team skills or rudimentary knowledge of how companies actually worked compared with other graduates of elite institutions that we hired. As I knew from long experience in observing employees, these skills were essential. Nothing happens in industry from the sole effort of a single mind working in isolation. I wish it did; it would have made life so much easier! So one of the reasons I came to Caltech is that I thought that it would be a good idea to teach these students some of these skills.

In doing this I followed in a grand Caltech tradition, however inadequately. Robert Millikan purportedly said in 1929 when he hired Horace Gilbert, a newly minted Harvard MBA (horrors!) to teach business to Caltech students, “I understand that a lot of our graduates are going into business. Perhaps we should teach them something about that.” Professor Gilbert had a long distinguished career at Caltech and is fondly remembered by all who took his classes.Let me then tell you a little about what I have been doing with the academic descendents of these students.I developed two courses. The first was E/ME 103, The Management of Technology. I think Gilbert would have approved because it was based on Harvard Business School and other cases as well as lectures. This allows Caltech students the heady experience of critiquing decisions made by “experts” in large and small companies; decisions which, amazingly, can turn out to be really wrong. One highlight was Caltech graduate and Intel manager, Barry Lieberman (BS ’68), presenting to my students the pitch he was planning for Intel upper management. He was to propose an important (i.e., expensive) new piece of lithography equipment. As a tribute to the balanced way that Barry presented the choices, my students were not so sure that it was a good idea! President David Baltimore has been kind enough to guest lecture each year on the challenges and tribulations of the drug delivery process, which has been in the news of late—and not entirely favorably.

I was very fortunate in having as a mentor, when I arrived, Professor John Baldeschwieler [J. Stanley Johnson Professor and Professor of Chemistry, Emeritus]. John, in addition to being a distinguished chemist, has also started a number of companies and is familiar with the entrepreneurial process as a participant. He started the modern era of entrepreneurship education at Caltech by creating E 102, Entrepreneurial Development. Here each student team writes a business plan to commercialize an original idea. I took over this course as John went emeritus (although, thank goodness, he still advises me). We decided to build on this process and together with Art Center College of Design, our neighbor in Pasadena, USC and UCLA business school graduates, professors Richard Murray and John Ledyard, an NSF grant, and a cast of thousands, we created the Entrepreneurial Fellowship Program, a summer “boot camp” for entrepreneurs. During each program, for a period of six to nine months, recent grads were paid and tutored as they started a company. The Fellows claimed they loved it and there is no doubt we created entrepreneurs, though as yet no successful new companies (which is harder). This program ran for two years, at which point we ran out of money. In entrepreneur-speak, we built a model, but not a sustainable model.

The third course is ME 105, Engineering Design of Products. In addition to the focus on teamwork, this class aims to teach the things that could go wrong in creating a new product. Trivial things like: no one knows how to build it, no one wants to buy it, it kills the user, etc. We investigate how one can anticipate what these “disappointments” could be and design the product in such a way that these problems don’t occur. The students actually go through the process of building the product, which is where most of the learning occurs. After all, they need to make mistakes in a safe environment before they do it for real. I am aided in this endeavor by my background over the years of having made every mistake myself.

Last spring, I was approached by students who had just formed a Caltech student club called Engineers for a Sustainable World (ESW). What impressed me about the discussion were their seriousness and their willingness to work hard on the subject—to make it real. They had passion. Thus over the summer, through many meetings, Brendan Kayes, Jon Othmer, Derek Rinderknecht, Eugene Mahmoud, and I built a course. The class time would be coupled with an ESW speaker series devoted to bringing in outside speakers, all practitioners with some successes under their belt.

Our biggest challenge was to find suitable candidate projects for the student teams. It is very important for the teams to have access to someone who represents the customer so that the design is realistic. We turned to Timothy Prestero and Design that Matters (DtM), a Massachusetts-based non-profit group that acts as bridge to bring problems identified by nongovernmental organizations and underserved communities into the classroom for university engineering and business students to tackle in their courses and research. DtM had several years experience in the subject, had helped a number of student teams and—what was very important—had some excellent contacts. The course lectures were tuned to the issues peculiar to this particular subject, but based on the general principles of sound design practice. The teams addressed some basic issues confronting the poorest two billion people on the planet, which most assuredly include clean water, health, and energy.

Each student team is required to build a prototype of their product, or at least the plans for one. They need to include a study of the market for the product, how it will be manufactured and maintained, and address the human factors involved. There is an alphabet of concerns and constraints. Of great importance are the environmental health and safety effects of the materials employed, how the product is made, and how the product is used through to its disposal and possible recycle. These are issues of course which profoundly affect designs for the developed world as well. As the course is just a few weeks old, it’s hard to say how effective we will be. But given the initial turn-out and enthusiasm, I am very optimistic.

I could go on about my initial plans for a quiet summer transformed into something quite more interesting thanks to Caltech undergraduates Grant Chang-Chien and Dmitriy Kernasovskiy. They approached me to do a SURF project, and together with Robert Rogan (PhD ’04) and UCI graduate student Renee Rottner, we morphed our ideas into an elaborate study of five Caltech start-ups. We investigated what worked and what didn’t work for them as they addressed the terribly difficult challenge of commercializing revolutionary technologies. But I will leave that for another time. I’m over on my word limit!