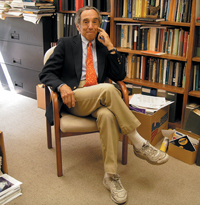 Noel Corngold was born in Brooklyn in 1929, grew up there, and fully expected that his career would be entirely on the East coast. He went to Columbia for his bachelor's degree, and then ventured, in what at the time seemed far afield, to Harvard for his PhD. California was definitely not on his mind. When he was in high school, it seemed that Noel was destined to be a chemist and like many of his generation he played around with sulfuric acid and mixed various concoctions in test tubes in his family kitchen (when his parents were out of the house, of course).

However, while taking some courses after high school at the equivalent of a junior college, he asked his chemistry teacher so many questions about what the electrons were really doing that the teacher said “If you keep asking questions like that, you go across there to the physics department and you ask them.”Which is precisely what Noel did.

Much to the surprise of those who would meet Noel later and know him as a theorist, Noel did an experimental PhD. Harvard sent him to Brookhaven National Laboratory where he helped to measure the magnetic moment of the neutron. The measurement was a great success, much more accurate than the competition, but Noel decided at that time that he would rather fight equations that don't want to be solved rather than equipment that does not want to work.

After his PhD, Noel worked at Brookhaven Laboratory with a small group of theoretical and experimental physicists, concentrating on neutron physics. This was a golden era that resulted in many important publications and the start of many influential careers in nuclear reactor physics. Noel became an expert on the physics of large numbers of neutrons in reactors and during that time wrote several seminal papers on this topic.

Noel pulled up stakes in 1966 and came to Caltech to work on nuclear engineering. This period was the peak of optimism about nuclear power, a heyday where everyone believed that nuclear power would be too cheap to meter, even that every family would have a nuclear-powered automobile.

Caltech's nuclear engineering program, though short-lived, attracted superb students; several went on to become prizewinners and distinguished alumni. But the national mania for nuclear engineering waned in the 1970s and Noel turned his attention to other situations where he could apply his expertise on the complex dynamics of large numbers of interacting particles. Plasma physics is just such a field and in the late 1970s,Professor Roy Gould [BS '49, PhD '56] was just building a small tokamak at Caltech (a tokamak is a device with a toroidal magnetic field configuration which is very good at confining hot plasma). The new ideas of chaotic mechanics were beginning at that time and Noel, together with a student, took one sample of noise from the tokamak and, by doing what was extreme number crunching for the time, managed to assign a fractal dimension to the tokamak turbulence. More recently, Noel has explored some of the peculiar theoretical features of the pure electron plasmas produced in another experimental device constructed by Gould.

Although neutron physics is only one of Noel's interests these days, the nuclear engineering community is still very appreciative of his work and this year the American Nuclear Society awarded Noel its Eugene P.Wigner Reactor Physics Award for his pioneering theoretical work on how neutrons behave in reactors. His nuclear colleagues also recently published a special issue of the journal Progress in Nuclear Energy titled “A Collection of Papers to Commemorate the 70th Birthday of Professor Noel Corngold.”

Noel has served on too many Caltech committees to remember (being a member of the boards of the Athenaeum and of the ill-fated Baxter Art Gallery were particularly entertaining), and presided as the unofficial administrative head of the Applied Physics Option for fifteen years, all the while keeping in good cheer. Noel has taught many courses over the years and in particular, introduced more than a generation of graduate students to the intricacies of thermodynamics and statistical mechanics. On a personal note, Noel is a great believer in the virtues of the bicycle and most often comes to his office via that means of transportation, all decked out in bicycle regalia. Noel has become both an expert on wine, and more than a slight art maven via the influence of his wife, Cynthia, who is an artist and art therapist.

Noel asserts that he will never retire, hoping always that one more “nice problem” lies ahead to be grappled with. The only possible diversion is the new—and—unique grandson, 18-month-old Wally who, Cynthia agrees, is both“handsome and brilliant.”

Paul Bellan is Professor of Applied Physics at Caltech.
There is more on Professor Noel Corngold at www.aph.caltech.edu/people