Technical Reports in the New World 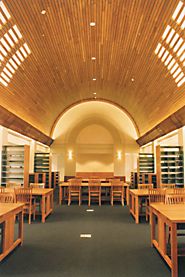 In 1997, Caltech opened the Sherman Fairchild Library of Engineering and Applied Science, the result of a generous gift from the Sherman Fairchild Foundation. This new library provided not only an aesthetic environment for study and reading but also a state-of-the-art computer-systems infrastructure. The fast network, new servers, and high-end workstations formed the core of expanded networking services of the future. Recently this technology was upgraded with wireless access by a gift from the Lee Center for Advanced Computing. One of the most far-reaching of the Library's new initiatives is the commitment to the creation and maintenance of digital technical reports and other documents—part of a revolution in academic publishing that is now taking place across the globe.

It is generally accepted and understood that the research community, along with everyone else, is shifting from a printing-press culture to one dominated by the global computer internet. Faculty members in every discipline hail the convenience of real-time desktop access to whole collections of journal articles over the internet. It was the creation of the world wide web that made this ubiquitous electronic alternative to the print journal possible, though subscription barriers remain the same and research libraries continue to struggle with escalating journal prices.

As society moves into the electronic environment, the Copyright Law and its attendant doctrines and interpretations*[see footnote] have been alternately challenged or championed depending on one's perspective of how the internet optimizes sharing of information. If the scientific ethos, as Robert K. Merton observed in 1942, is to continue to embrace common ownership of research findings, then society or, at the very least, the research community, must establish a new model for its written work that balances the existing law with the needs and behaviors of that group.

The research community has been dependent on publishers for peer-review and distribution of work for community acknowledgement. Naturally, the publishers, societies, as well as commercial entities develop and adhere to a business plan to survive. For the most part, these have evolved into a "reader pays" access model that creates ever-higher financial barriers for the prospective audience. At the Conference on Scholarly Communication hosted at Caltech in March 1997, the attendees, university librarians and provosts from across the United States, concluded that distribution of scholarly works could be decoupled from the peer-review process. This would make the former less dependent on the publishers' business plan and thus free it from the high cost barrier necessitated by publisher involvement.

Similar to the culture of preprint distribution in the physics community, engineering departments have a long and successful history of producing valued technical reports documenting the research of their respective faculty. These reports have functioned not only as communications to funding agencies but also as a mechanism for exchanging research results with targeted groups at other universities and institutes around the world. Such exchanges continue to be a necessary part of the informal human network so essential for sharing research results—a sharing that is a prerequisite for research progress.

The intent/purpose of this genre, that of reporting back to funding agencies and disseminating research results, is aided by current technologies allowing technical reports to be digitally mounted on a network for all to easily discover and access. Computer science technical reports are an established example. For decades, even as far back as the 1950s, computer science departments around the world published technical reports documenting the research of faculty and students. Through a Defense Advanced Research Projects Agency (DARPA) grant in 1994, this effort was migrated to a digital federated library environment called NCSTRL, the Networked Computer Science Technical Reference Library. Over the years and through the success of the program, the list of participating organizations has now grown to over 200, including Caltech. The project's impact curtailed the need for print copies of the reports to be produced and distributed. More-over, as long as each site keeps its digital collection current and its repository server up, everyone on the internet has immediate 24/7 access to the worldwide collection.

Many engineering groups at Caltech generate technical report series, including Earthquake Engineering Research Laboratory Reports, the GALCIT Reports in Aeronautics, and the aforementioned Computer Science Technical Reports. Unhindered by licensing and cost barriers, interested persons anywhere and at anytime can access these collections over the internet.

In 1999, the Caltech Library System conducted a self-publishing survey at Caltech and found that, as was hypothesized, the Engineering and Applied Science Division predominated on the Caltech web. This observation formed the basis for moving aggressively to mount the Division's reports to the internet, thus forming the nucleus of a digital library. Subject specialist librarians from the Sherman Fairchild Library work with the Division's faculty to review the collection, assure quality control, and mount the reports in the digital repository. The Library converts any print-only reports to pdf files, adds the metadata (descriptive and identifying elements of the document) for searching, and submits them electronically into the local digital repository, for archiving in perpetuity. This approach has made over 260 Computer Science reports back to the 1980s now available. Another 193 reports from the Earthquake Engineering Research Laboratory were added this past year. In addition to converting retrospective collections, the library oversees the addition of new reports authored by current faculty and students, such as the Computer Science Technical Reports, to active repositories.

Most recently, in late June 2001, the success and interest in the Library's work opened another trial for digital scholarly publishing to the internet. Professor of Mechanical Engineering Chris Brennan, organizer of the Fourth International Symposium on Cavitation, approached the Caltech Library System to publish the conference's papers on the web. Submissions began in May 2001 and the site was ready for use by early June. Even with a few papers still lacking, the proceedings of nearly 100 papers were available for viewing well before the conference began. No time was lost for collating, printing, and mailing. The papers continue to be available to all and the proceedings are documented via the national library catalog, Worldcat, with a link to the persistent URL, http://cav2001.caltech.edu.

The Library's commitment to the maintenance and world-wide discovery of the digital library entails adhering to current and evolving national standards for protocols, file formats, and markup. To that end, the Caltech Library System joined the Coalition of Networked Information, and is an active participant in NCSTRL, NDLTD, and other organizations implementing the Open Archives Initiative (OAI) protocols for metadata harvesting.

A year ago at Caltech, Professor Kenneth Pickar commented that the internet is the "mother of all disruptive technologies." Through the gift of the Sherman Fairchild Foundation, the Caltech Library System embraces the capability and potential of the internet to offer the research community opportunities to make the most of this most excellent disruption.

*Doctrine of First Sale (Section 109 of the Copyright Act, 17 U.S.C. 109) allows the owner of a copy of a legally acquired book or recording to sell or otherwise dispose of possession without the authority of the copyright owner. The principle of fair use (Section 107 of the Copyright Act, 17 U.S.C. 107) continues to be subject to varying interpretations despite the factors laid down in the law.

Kimberly Douglas is the Director of the Sherman Fairchild Library of Engineering and Applied Science and Technical Information Services. Caltech Alumni Association members have access to many of the Library's services including on-site use of the on-line services and databases.