Mitigating the Effects of the Ultimate Fracture Mechanics Problem 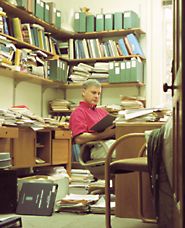 Professor of Civil Engineering John Hall works with a group of earthquake engineers and scientists at Caltech who aim to understand and mitigate the risks posed by major earthquakes. Hall is intrigued by the interplay between engineering and seismology, the challenge of the technical issues, and the necessary tasks of public education and application of research results. In the earthquake field, success is ultimately measured by achievements in risk reduction.

Over the last decade, Hall has been interested in how to reassess the earthquake safety of tall buildings in light of findings that have been made since many of these structures were built. The biggest high-rises are steel frames with welded connections that, as revealed by the 1994 Northridge earthquake, may exhibit brittle fracture rather than the desired ductile yielding when stressed during strong ground shaking. Recent discoveries of new faults has increased the seismic hazard in many cases, such as the Elysian Park blind thrust fault under Los Angeles which could produce a magnitude 7 event. Furthermore, earthquake faults are now known to focus energy in the direction toward which the rupture is propagating, a kind of seismic Doppler effect, resulting in rapid ground displacement pulses that could be especially damaging to tall buildings. The ongoing research program uses mathematical building models and computer simulation to quantify these effects and provide data on which economic justification of retrofit programs could be based.

The above graphic of a fault line shearing in a computer-simulated earthquake demonstrates that large ground velocities occur in front of the propagating rupture, the seismic Doppler effect. (Credit: B. Aagaard)

Computer simulation is an important tool in Hall's research. He has employed it, for example, in studies of the earthquake response of concrete arch and gravity dams and in demonstrations of the effectiveness of using rubber base isolators and shock absorbers to obtain highly seismic resistant designs for structures such as hospitals which need to be functional after an earthquake. Computer simulation is even being applied to the Earth to model the earthquake itself. A recent investigation has shown how the particular features of the 1999 Chi-Chi earthquake in Taiwan resulted in a relatively benign Doppler effect, which helps to explain the less-than-expected damage from shaking for this magnitude 7.6 event.

With potential savings in the tens of billions of dollars, it is entirely practical to establish a dedicated laboratory... which would feature a large shaking table on which full-size houses could be erected and tested.

In 1998, Hall took on the management of a multi-university research project funded by the Federal Emergency Management Agency (FEMA) to improve the earthquake resistance of wood construction used in housing. Long neglected by the research community, wood buildings suffered about $20 billion in damage from the Northridge earthquake. Since wood construction is surprisingly complicated structurally from a mathematical modeling point of view, much of the effort has been laboratory based in order to investigate basic behavioral modes. So far, limited shake-table testing indicates that structural enhancement of the typical exterior stucco finish and interior gypsum board walls, together with other modest improvements, could tremendously reduce the damage potential of wood houses. With potential savings in the tens of billions of dollars, it is entirely practical to establish a dedicated laboratory for such studies, which would feature a large shaking table on which full-size houses could be erected and tested. As the present FEMA project winds down, Professor Hall takes every opportunity to argue for this exciting new facility for earthquake engineering research.