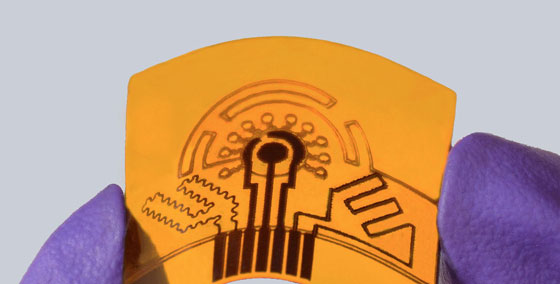 The Next Wave of Wearable Sensors: Sensitive, Low-Cost, and Flexible

Wei Gao, Assistant Professor of Medical Engineering, and his colleagues have developed a wearable sensor that can monitor levels of metabolites and nutrients in a person’s blood by analyzing their sweat. Most previously developed sweat sensors targeted compounds that appear in high concentrations, such as electrolytes, glucose, and lactate. Gao’s sensor is more sensitive than current devices and can detect sweat compounds in much lower concentrations, in addition to being mass producible. Previous microfluidic-based wearable sensors were mostly fabricated with a lithography-evaporation method, which requires complicated and expensive fabrication processes. His team makes their biosensors out of graphene, a sheet-like form of carbon. Both the graphene-based sensors and the tiny microfluidics channels are created by engraving plastic sheets with a carbon dioxide laser, a device that is now so common that it is available to home hobbyists. Gao’s first sensor measures respiratory rate, heart rate, and levels of uric acid and tyrosine. Tyrosine is an indicator of metabolic disorders, liver disease, eating disorders, and neuropsychiatric conditions. Uric acid, at elevated levels, is associ- ated with gout. Considering that abnormal circulating nutrients and metabolites are related to a number of health conditions, the information collected from such wearable sensors will be invaluable for both research and medical treatment. 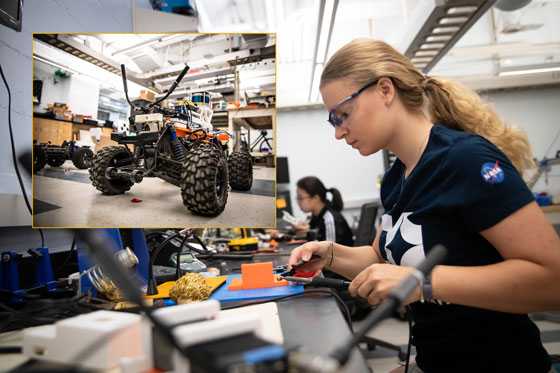 Caltech Undergrads Build the Little Robot That Can

A robot designed and built by Caltech undergraduate students working with graduate students and JPLers made it to the field in the first phase of the Subterranean (SubT) Challenge, an international competition sponsored by the Defense Advanced Research Projects Agency (DARPA). Named after a famous rescue sled dog, Balto, the robot is built atop a commercial radio control car but with an entirely replaced electrical and control system. It is among the fleet of flying and tank-like robots that competed Caltech Undergrads Build the Little Robot That Can in the August 2019 tunnel-navigation competition in which the Caltech-JPL team took second place. Because of its light weight and small size, Balto is capable of rushing in and substituting as an ad hoc node in a wireless communications network. Initial work on Balto began in CS/EE/ME 75, Multidisciplinary Systems Engineering, a cross-discipline special projects undergraduate class, and continued through the Summer Undergraduate Research Fellowship (SURF) program.

The New Center of the Caltech Universe: Hameetman Center 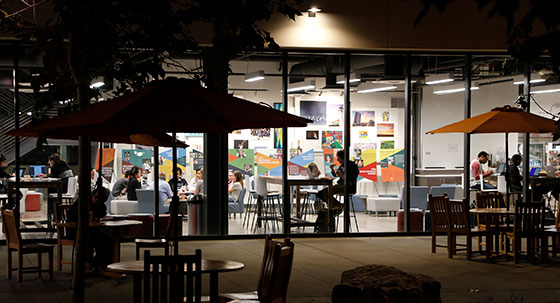 The Hameetman Center, built with gifts from Fred (BS ’62) and Joyce Hameetman and Steven and Mie Frautschi, was dedicated in February of 2019. It quickly became a hub of activity for the entire campus. Plenty of light-filled space, food and drinks provide by the Red Door Marketplace, and an expanded outdoor patio have drawn students, faculty and staff to Hameetman for casual meetings or individual study; it’s a place to share a coffee with colleagues, grab a great avocado toast, and a venue to visit after an evening concert at Beckman Auditorium (or a long problem set)—the Red Door is open until 2 am! Upstairs are meeting rooms of various sizes, including the Steven and Mie Frautschi performance room. This is a state-of-the-art rehearsal room and recording studio for student performing arts groups and is used by the Caltech-Occidental Wind Orchestra, the Caltech Jazz Band, the Caltech Glee Club and Chamber Singers, Caltech Chamber Music and Guitar Ensembles, and The Caltech Orchestra, as well as Theater Arts at Caltech (TACIT). 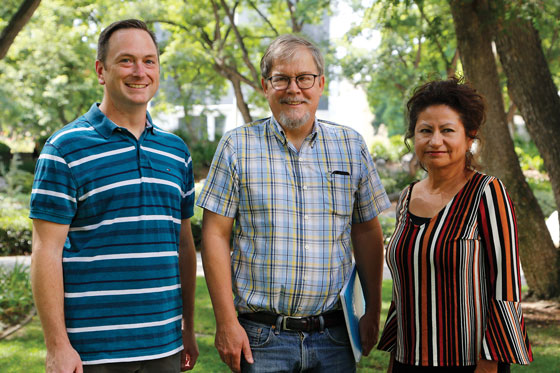 In recognition of the fact that scientific advances often rely on the development of specialized software, Caltech has launched the Schmidt Academy for Software Engineering to train the next generation of science-savvy software engineers and set new standards in scientific software. The three-year pilot program, which is supported by Eric and Wendy Schmidt, is funding four Caltech Schmidt Scholars this year to work with research groups across campus; the cohort will grow to 12 scholars next year. For one to two years, the scholars will receive industry-competitive salaries while being mentored by a senior software engineer at Caltech and embedded in a research group. As they begin to work on their projects, scholars will attend a software “bootcamp” of relevant classes led by Schmidt Software Academy instructor Donnie Pinkston (BS ’98), a familiar face to Caltech computer science students. Umesh Padia (BS ’19), who is among the inaugural class of Caltech Schmidt Scholars, deferred enrollment as a graduate student at MIT to jump on what he describes as a way to build skills while simultaneously creating a tool that helps scientists who are at the forefront of their fields. “This is a way to work on a scientific project as a leader, which is uncommon at this stage of your career,” Padia says. “If you go to work for a tech company, you’re going to work on someone else’s project and be a cog in a machine. Here, you’re the project manager, you’re the tester, you’re the software engineer—you get to see everything. It makes you a better software engineer.” 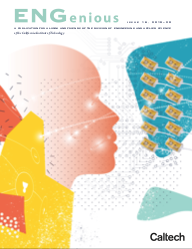