From Debugging to Integrity in Coding 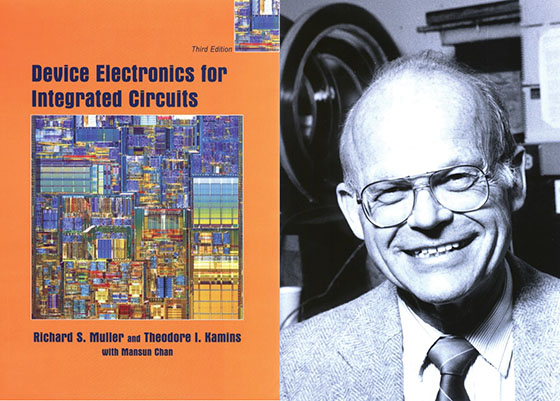 A Pioneer and Gifted Teacher

Richard Muller (MS ’57 EE, PhD ’62 EE) found himself in the midst of the revolution of solid-state electronics in the mid-twentieth century. ENGenious sat down with him to find out who at Caltech inspired him to engage with electronics, among all of the possible engineering paths, and how he has shaped the education and lives of generations of engineers.

ENGenious: Who inspired you to become an electrical engineer?

Muller: Many of the Caltech faculty were inspirational role models. Most influential to me was my advisor, Dave Middlebrook. When I began studies for my master’s degree at Caltech in 1955, the sources of information about my interest area, solid-state electronics, typically had their origins in research papers written by pioneers in the field. Many of the research papers reported Bell Labs advances and were difficult to place into meaningful context. Through questions and suggestions, Professor Middlebrook helped me to clearly identify what the previous work had shown and, more importantly, what favorable research path might lead to further advances in the area.

Richard Feynman in the physics department was also a big influence. He was a captivating and outgoing man whose intelligence and depth of understanding were inspirational. He was a truly gifted teacher. His teaching helped me see the ways in which electrical engineering rests on strong foundations from physics and mathematics.

Imagine my pleasure in the fortunate pairing of these two role models decades later, when Dave Middlebrook received Caltech’s Richard Feynman award for teaching. I am profoundly thankful that I have been taught by these two talented professors.

ENGenious: How has your Caltech education influenced your career?

Muller: Caltech was excellent at cultivating independence in scholarship. In retrospect, I see now that encouraging papers with sole authorship, which was the standard at the time, put candidates in the very important position of finding their own profitable on-target research paths. We had to prove that we could establish relevant research on our own, an approach that is essential to pursuing results that have impact.

This is not to say that Caltech graduate research in the 1950s was a solitary endeavor. Libraries were the socio-academic hubs of campus. You had to know where all of the libraries were, because these were the sites to seek out well-written documents that can serve as role models for budding researchers. Library work might sound like an individual act, but there was a lot of talking and sharing at libraries about who wrote the best solutions and what articles could be of interest.

In my career as a teacher, this practice of collegiate reading and sharing has developed as a lasting influence of my experience at Caltech. It also influenced how I went about writing the teaching text that I coauthored with Ted Kamins, Device Electronics for Integrated Circuits, published in 1977. In its third edition and with five translations, Device Electronics is still used in teaching today.

ENGenious: Can you give a specific example of that shared book knowledge at Caltech?

Muller: There was the Bone Book, as in “bone up on your studies.” Once you went through your qualifying exam, which every graduate student approached as a necessary crisis, you were obligated to write it all down. You wrote about the professors in the room, what the problems were, and how you solved the problems. You then passed the Bone Book on to whomever was most likely to be the next student facing the qualifying exam. These actions were all done in good faith, and the book was a great resource and morale builder. Before your exam, you could look in the Bone Book (in which there were entries dating as far back as the 1930s) and read about the exams taken by dozens of doctoral candidates, some of whom later earned Nobel and other distinguished prizes as well as their Caltech doctorates.

ENGenious: Why and how did you choose an academic career?

Muller: Necessity and then satisfaction, really. In 1957, the University of Southern California (USC) had a teaching emergency. There was an electrical engineering professor who left his post just a few weeks before he was to start teaching a fully enrolled course in solid-state electronics. I had recently finished my master’s degree at Caltech while working part-time at Hughes Aircraft in a joint program they had at the time. Hughes was contacted by USC to find a suitable stand-in for their vacancy, and my name was brought up as someone who might be both interested and able to teach the course. I still recall the lengthy evening discussions with Joyce, my new wife, about the pros and cons of taking on the new obligation. She understood better than I that embracing the experience would make it clear to us whether or not we were prepared for a full academic life at a research university. I decided to take the challenge, and within a few weeks I became convinced that an academic life would indeed be appealing for both of us. The course went well, and I was invited to teach it again in the spring. By that time, I had applied for and been awarded a National Science Foundation (NSF) graduate fellowship in support of a doctoral program. I returned to Dave Middlebrook, who enthusiastically agreed to be my advisor and supported my view that laboratory research on the electronic properties of solid materials would provide fruitful paths to advance the field of electronics. In teaching at USC in 1957–58, I had sensed the joy that there is in teaching at the university level, and I became convinced of how right is that age-old saying that “if you become a teacher, by your pupils you’ll be taught.”

ENGenious: What are the hallmarks of a gifted teacher?

Muller: At the top of the list are clarity in explanation and strong rapport with students. Once students are well known and understood by their professors, the best professors—the ones who have a sincere interest in the research field and who understand the boundaries that constrain its development— can align these boundaries with the goals and motivations of individual students and help further the research. A good advisor will also discern and help remedy shortcomings in performance. For instance, there are many students for whom English is a second language. Good professors will help with language and any remediation that improves the communication of the research.

ENGenious: As a young professor at Berkeley just after Silicon Valley emerged on the map, how did your research and the industry start to interplay?

Muller: My mentor at Berkeley, the late Don Pederson, had built up a strong research program in solid-state electronics. My interest in research on the properties of thin films was a welcome addition right at the time that industrial focus on silicon devices and processes had shown strong advantages over deposited thin films. I revised the solid-state course at Berkeley to reflect that shift and made it entirely focus on the physics of device operation and the design of integrated circuits. By the end of the 1960s, it had become apparent that integrated circuits made possible such useful micro-systems that they would force the redesign of many systems in many fields. The link to industries was direct, immediate, and broad.

ENGenious: Was there a pivotal moment in your academic career that related to this revolution to come?

Muller: Yes, and it involves a former student who is now a professor at Caltech. The moment was from the startup phase in our looking at building non-electronic as well as electronic devices using integrated circuit (IC) processes at Berkeley. We fabricated a gas-sensing device in which a ribbon of polycrystalline silicon was formed into a doubly supported beam, coated with an absorbent thick film, and resonated after being actuated by an IC-controlled electric field. This project was Roger Howe’s research, and it was followed by a design and demonstration of the first operating micro-motor by Yu-Chong Tai, presently Executive Officer of Medical Engineering at Caltech.

ENGenious: How did that translation start to happen at the practical level, moving from academic lab to industry?

Muller: From Don Pederson, I learned the art of pruning. Strongly supporting the enlightened adaptation of concepts, materials, and new ideas is what brings progress to research, but creative engineering is also about retiring less-rewarding ideas and projects in order to spearhead progress.

Realizing the impact of the developments of integrated circuits, my research group shifted focus from developing better electronic devices to designing micro-devices that could sense and interact with nonelectric variables such as force, pressure, and photons. That first micro-motor and other devices like it called out for a place to house the partnerships and entrepreneurial applications of the lab work. To fill this need, a colleague, Dick White, and I founded the Berkeley Sensor & Actuator Center (BSAC) in 1986, with the support of NSF and five industrial sponsors.

A breakthrough achievement occurred in the early years of BSAC when an industrial sponsor (Analog Devices, which had joined while Analog was solely an IC manufacturer) applied the BSAC-invented poly-Si mechanical-device processing to produce a breakthrough accelerometer for automobile airbags. Over the 30-plus ensuing years, scores of advances were carried out at BSAC as the MEMS/NEMS industry grew from negligible size to its present tens-of-billion-dollar worldwide product size. BSAC itself has likewise grown, until today it is directed by 13 research faculty, who typically supervise more than 100 graduate students in programs associated with roughly 35 industrial sponsors. In 2013, the impact of BSAC was honored by the presentation of the IEEE/Royal Society of Edinburgh (RSE) James Clerk Maxwell Medal to BSAC—Dick and myself, as the founders.

ENGenious: For a scientist, you have had a heavy focus on communication and language skills throughout your roles in teaching and research. Why is that?

Muller: I discovered this passion early, when I founded the first newspaper at my grammar school. I went on to run the newspaper in high school. I was the editor-in-chief of the Stevens newspaper at my undergraduate college. In those early years, I had a strong inclination toward a career in journalism—but the appeal of engineering caused me to decide on study at an institute of technology. An important part of my research career has been service as editor-inchief of the IEEE/ASME Journal of Microelectromechanical Systems from 1997 to 2012. These years of editing were valuable in learning to evaluate ideas and to express them with clarity and impact. With these perspectives, the researcher is equipped to recognize frontiers in a problem area and to decide on ways to push back these frontiers. Charting frontiers is the skill of pioneers.

Richard S. Muller is Professor Emeritus in the Department of Electrical Engineering at the University of California, Berkeley, and Co-Founding Director of the Berkeley Sensor & Actuator Center.

From Debugging to Integrity in Coding

From Debugging to Integrity in Coding
PDF / HTML