Caltech has long brought together masters from many fields to create the unimaginable. In the field of silicon photonics, in particular, the open and collaborative culture of the Division of Engineering and Applied Science has allowed for the assembly of an incredible orchestra of scientific expertise. Silicon (Si) wafers have for decades provided the instruments for this orchestra, but recently, a flood of integrated-systems research has led to applications that have completely transformed these instruments—and this, in turn, has impacted the life of almost every human on the planet.

There are many conductors of this orchestra, but ENGenious sat down with four of them: Professors Azita Emami, Ali Hajimiri, Kerry Vahala, and Amnon Yariv. They shared the history of the field, their current work in it, and some incredible potential applications, ranging from 3-D cameras on T-shirts to biosensors under the skin to planetary imagers.

The key innovation behind these efforts is the possibility of manipulating photons and electrons together in a single device. As the sophistication of building devices into the fabric of silicon has increased, researchers have learned to use devices based on or embedded in silicon to generate and process light quanta and photons, for data processing, storage, and more.

Photonics offers the possibility of immense bandwidth for the transmission of data, as demonstrated by the capacity of the optical cables that carry the information weight of the Internet around the planet. Electronics, on the other hand, can store and manipulate exabytes or zettabytes of data as well as perform trillions of operations in an instant. The two sister technologies, electronics and photonics, started with immense potential but also some seemingly irreconcilable differences.

Amnon Yariv, Caltech’s Martin and Eileen Summerfield Professor of Applied Physics and Professor of Electrical Engineering, provides some historical perspective on the critical work that allowed for the integration of photonics and electronics on silicon. “Up until the 1960s, these two technologies were considered and treated as two separate fields and pursued separately,” he explains. “The main reason was that the two basic enabling ‘mother materials’ for these disciplines were very different. Electronics was mostly based on silicon, which cannot, for fundamental reasons, be made to also make lasers.” 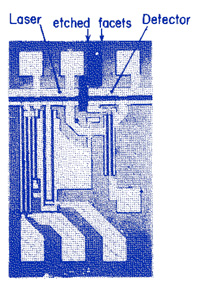 But, he continues, “starting in the mid 1970s, it became clear that major advantages could follow if these two foundational technologies could come together, with both optical and electronic functions carried out in physical proximity, ideally on single optoelectronic chips. The first steps in this direction were taken at Caltech starting around 1970, when we proposed and demonstrated the new field of optoelectronic integrated circuits (OEICs). A canonical example was the demonstration of transistors [electronics] driving lasers [optics] on a single gallium arsenide (GaAs) crystal—that is, having the key devices of optics and electronics [see Figure 1]. A more recent example from my group involves a hybrid Si/III–V platform that is a demonstration of a new type of laser in which light is generated in the III–V material but is stored in the essentially transparent Si that is bonded to it. The result is a reduction of a thousand times in the quantum phase noise of the laser output field and a corresponding increase in its coherence.”

Ali Hajimiri, Thomas G. Myers Professor of Electrical Engineering and Medical Engineering, explains further. “Now, the beauty is, electronics and optics have their own strengths. For example, if you think about electronics, the strength of the electronics is that gain, amplification, is easy to generate in electronics. We have also learned to perform other complex tasks, such as mixing and oscillation, as well as signal processing in both analog and digital domina, thanks to the practically unlimited number of transistors. These are the strengths of electronics. Now optics, on the other hand, gives you extremely high-quality delays and extremely large bandwidths. The trick is the combination. It is a match made in ether!” 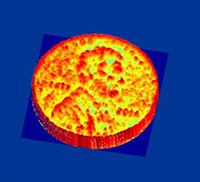 Products of Hajimiri’s laboratory illustrate these powerful congruencies and combinations. One recent example is a 3-D camera chip called a nanophotonic coherent imager (NCI) that translates laser illumination of a target object into high-resolution three-dimensional images. The prototype uses only 16 pixels but can scan a larger area by imaging four squares at a time to create a mosaic (see Figure 2). He imagines one possible application of this technology to be a 3-D camera on the surface of a T-shirt.

Yariv adds: “The early OEICs did not employ silicon and thus could not benefit from the existing base of fabrication technology, representing a cumulative investment of trillions of dollars. We are now in a position to benefit in optoelectronics from this investment.” 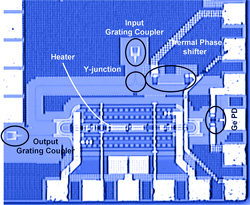 Azita Emami, Professor of Electrical Engineering, is also working on the co-design of electronics and photonics to take advantage of this investment. Her lab is designing devices that can dramatically reduce the energy consumption of data communication systems in data centers and high-performance computers. Examples of such devices are the silicon photonic differential micro-ring modulator (MRM) (see Figure 3) and the 3-D–integrated CMOS-silicon photonic optical receiver (see Figure 4). Such devices reflect a holistic approach to the design of electronics and photonics.

“The years that we have put into the silicon industry to develop all the infrastructure for electronic systems can now be repurposed and used for development of silicon photonics,” Emami says. “This can lead to lower cost, a better platform for integration of electronics and photonics, and use of computer-aided design tools.”

It is a particularly interesting time for scientists to be working in this field, she continues, “because now we can use the same kind of approach for building sophisticated systems in both electronics and photonics. My focus is on what enables high-performance computing, data centers, and efficient communication systems. Silicon photonics is well suited for these applications, because it provides a low-cost platform for very low-power and high-speed data communications in the optical domain.”

Kerry Vahala, Ted and Ginger Jenkins Professor of Information Science and Technology and Applied Physics, has pioneered silicon photonic devices that dramatically lower the power required for nonlinear optical processes. Optical devices that traditionally require hundreds of watts of optical power are possible using 100,000 times less power, in the milliwatt range. This new class of extreme-nonlinear optical device is the underlying breakthrough in a number of integrated devices that can challenge the dominance of electronics in areas like microwave oscillators.

Vahala says that while photons and electrons continue to have clearly defined roles, certain traditional electronic functions will shift to photonics because of the inherent performance advantages of these new silicon-photonic devices. Other areas will also benefit from the same class of device. For example, his group is studying special optical waves called solitons to create precisely spaced “combs” of optical lines that are useful in spectroscopy, accurate time keeping, and even astronomy. One version of this device is going into a silicon photonic system to create a device called an optical synthesizer (see Figure 5) that generates tunable optical frequencies with extremely high stability. Vahala says: “An added benefit of placing components on silicon is that sophisticated electronics can be called upon to monitor and control these new all-optical functions.” 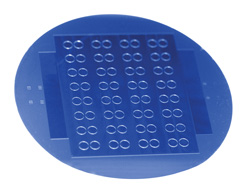 The professors who are leading Caltech’s electronic light orchestra agree that the Institute is an ideal place to research and develop silicon photonics. As Hajimiri puts it, “Caltech obviously is very strong in fundamentals. But because of how open it is to new ideas, people here have the ability to jump from one field to another.” He continues, “If I have a question, I go knock on Kerry’s door. I know that he will be helpful. It’s so easy to access the top-class talent in everything.”

Emami adds, “Caltech is a place where you can, at every dimension, find your research passion and explore new directions. Faculty take risks all the time. We do different things in any given stage of our careers. It’s amazing that we can do that.” Hajimiri agrees: “I think combining top-tier, high-quality scientific expertise together with risk taking at a place like Caltech has allowed it to be a center of gravity for the silicon photonics effort. Now we can take it to the next level, applying the concepts over a broad range of applications."