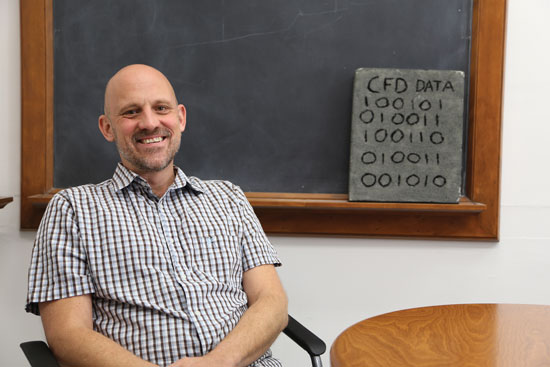 Some people might think about a glass of champagne after a long day at the office when they hear the phrase “therapeutic bubbles.” But the phrase has a very different meaning to Professor of Mechanical Engineering Tim Colonius, who leads the Computational Flow Physics research group at Caltech.

ENGenious: How would you describe your group’s research?

Colonius: We try to simulate turbulent flows on the computer, and then we use those simulations to understand the physics. An example is trying to understand how a particular flow might be unstable to small disturbances. Perhaps one wants to enhance an instability in order to better mix two fluids, or control an instability to reduce noise or vibration. We would do a computer simulation that would try to isolate the physics behind that instability. We mainly work in three application areas. One is aeroacoustics, which is how sound waves are generated by or interact with flows. The second is flow control. How do we put sensors and actuators into a flow and make it do something that it wouldn’t do on its own? And the third area is cavitation and bubble dynamics, and that’s where biomedical applications of bubbles come in.

ENGenious: How did you come to research treatment for kidney disease?

Colonius: The late Brad Sturtevant, who was a professor in aeronautics here, had an experimental program on lithotripsy when I first got to Caltech. Lithotripsy is a non-invasive procedure for breaking up kidney stones. Brad saw the models of bubble dynamics that I was developing at the time and said, You should come and work with me because we need this kind of analysis to better understand lithotripsy. The lithotripter creates shock waves and then focuses them to where the physician believes the stone to be. It is fired over and over until the stone is broken into tiny bits. Lithotripters have been around since the 1980s, but there was hardly anybody studying the physics behind how the machine works until a group led by Andy Evan at the Indiana University school of medicine started the project with Brad and Larry Crum. One of Brad’s great contributions was to make an experimental lithotripter to see how it worked under controlled laboratory conditions. That started a line of research on how kidney stones break under the action of shock waves that continues today. Understanding the mechanics is important because we need to know how the lithotripter can be used efficiently and safely, and ultimately design more effective ones. But almost immediately the question also became, Why is there sometimes injury? Hemorrhage and other kinds of acute effects can result from the treatment.

ENGenious: What has this line of research revealed?

Colonius: We think there’s sort of a two-step process when a kidney stone is pulverized. First, the stone gets broken up into big pieces through the action of the shockwave, like taking a brittle material and hitting it with a hammer. As smaller pieces are made, there’s no way for the shockwave itself to break them further, but a second mechanism then pulverizes the stone into fragments so small that they can be passed naturally. What’s thought to occur is that cavitation bubbles, tiny bubbles of gas completely surrounded by liquid, are created by the expansion that follows the initial shockwave. When the bubbles collapse, they make their own shockwaves that further break the bits of stone.

ENGenious: Has your research had any effects on medical practice?

Colonius: One of our team’s findings regarding lithotripsy is that bigger and faster is not better. A lower amount of energy delivered at the proper rate is going to lead to a more effective process with less injury. We developed a model that describes how this works, and it predicts that there’s an optimal pulse repetition frequency of a little less than one hertz. Because the physicians and medical professionals I work with have been effective at putting out this message, there’s beginning to be a trend of running lithotripters more slowly and also going to lower shock energies, and even designing new lithotripters with broader focal zones. Even if we’re just working behind the scenes to understand the physics, it’s gratifying to me to see that understanding reflected in practice.

ENGenious: How is the engineering contribution to this field unique?

Colonius: Well, there are lots of applications that involve bubble dynamics, and we are providing specialized techniques to predict these flows. We’re not quite there yet, but we would eventually like to understand in greater detail and be able to predict how biological materials respond to acoustic waves and cavitation. All the micro-structural aspects play a role in whether and how tissue gets damaged. There are problems like sonoporation, which is getting bubbles inside cells to deliver drugs. We don’t have good simulation models for how these soft materials respond to mechanical stresses. Right now we have to homogenize the material to make a model of it. But we would like to start to get to a more realistic description.

ENGenious: What are some other medical applications of your research on bubbles?

Colonius: One application is in the area of cancer treatment. Histotripsy, as it is called, uses focused ultrasound to create a cloud of cavitation bubbles that melt or ablate cancer cells. Lithotripter-type devices have also been used for other conditions, like tennis elbow or planar fasciitis. If a lithotripter is fired at a bone that was broken and it’s basically healed but not attached, it can re-damage the area and re-initiate the body’s own healing process. Finally, in the area of therapeutic bubbles, if one coats a bubble with a drug, for example, and excites it with ultrasound, it can go into cells and deliver the drug right into the cell. Understanding how waves create bubbles and how those bubbles interact with tissue and biological materials is, I think, a key to a lot of biomedical technology.