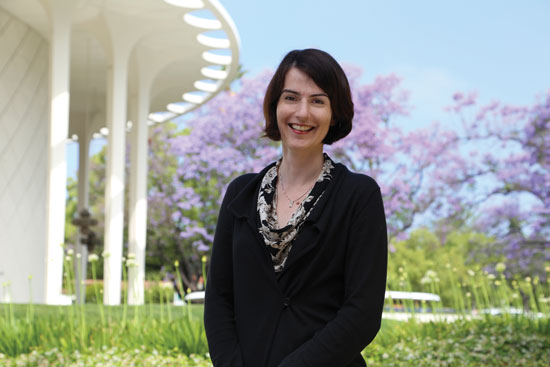 On the wall of my office, where I can see it whenever I look up from my desk, is the old parable of the blind men trying to explain what an elephant looks like. Each one believes he’s doing this by describing the part he’s touching—the trunk, an ear, a leg, and so on—but none of them, of course, has the whole picture. 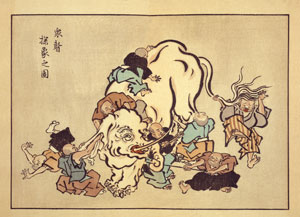 This is a great metaphor for the way our research is employing really new approaches to tackling old problems, and modeling and controlling turbulent flow. Richard Feynman called turbulence “the most important unsolved problem of classical physics.” Thus people have been banging their heads on it for a very long time. Progress has been incremental, but we really feel that we have a chance to sort of blow this open at this point. I should make it clear that we specifically study flow over surfaces, which is different from free-space turbulence because the wall has a very strong effect. This is the form of turbulence that slows the progress of marine vessels, aircraft, or automobiles through air or water, or natural gas or petroleum products through pipelines. As I described in my Richard C. Biedebach Memorial Lecture at Caltech entitled “Taming Turbulence,” suppress turbulence in the thin boundary layers on the surfaces of commercial airliners and total aerodynamic drag could be nearly halved. If you could reduce drag at the surface by 30%, you could save $140 billion in fuel burn per year, with concomitant emissions reduction.

In a sense, what we’re trying to do is capture the general outline of all the aspects of the elephant and learn how to talk to it. It’s very easy to get focused on one aspect, but the non-incremental progress is going to come from being at the heart of the problem. A lot of the ideas underpinning wall turbulence came from Caltech in the ’50s and ’60s, so it’s been half a century or more since we have taken a fresh look at its foundations. Research advances have tended to be somewhat incremental, partly because of the complexity of handling the massive range of scales active in turbulence. With a commercial airplane, for example, the largest lengthscale will be the length of the airplane and the smallest will be several microns. The research community has brute force tools now where we can do fully-resolved simulations of the range of scales observed in flows with simple geometries in the laboratory rather than over a full airplane; the tools are limited by the computer power and the way the algorithms scale at present.

We are aiming to understand turbulent flow as a system. We want to be able to pull apart turbulence so that we can analyze subunits of it, maybe change one, and then put it all back together. In our experiments, we try to isolate certain parts of this system, change our interaction with them, and then see how the turbulence as a whole develops. It’s deconstructing and reconstructing turbulence, creating “test-tube turbulence,” if you will. The novel contribution from us is to say that if you view the governing equations in a particular way, then it does become a set of linear systems, and you can analyze each one of them, work them all back into the system, and over-stimulate one of them and trace the propagation of this disturbance through the system. 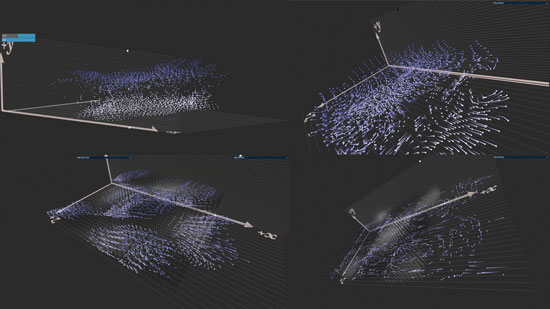 Software created as part of the Caltech/JPL/Art Center Data Visualization Internship Program gives a unique view into the complex motions associated with the individual subunits of turbulence identified by McKeon and co-workers. The wall is in the x-z plane and flow is in the positive x-directions. Gray arrows represent turbulent velocity and blue particle tails reveal the history of the motion of massless particles released on a uniform grid in the domain.

Instead of a chaotic field, you can think about turbulence as a very broad array of propagating waves that each have unique wavelengths in the directions parallel to the wall—i.e., in the sense of the main flow and cross-stream directions—and a temporal frequency to them. Because they all propagate at different speeds and they have different scales, it’s very hard to pull apart the ensemble of waves. But in our formulation, you can pull them apart, and that changes the game. When they’re all together, they interact—for example, one sees a complex, space-filling forest of intertwined hairpin-like vortices in high-resolution simulations, or when smoke is introduced into a laboratory flow. When we pull the ensemble apart, we can see this phenomenon associated with each wave. And, further, we can recreate the essence of the forest with just three of these propagating waves, instead of needing the full field to see this kind of structure. If we know the three propagating waves—and some recent work that we’re still doing says that even knowing the form of one might be enough—we can work out how to scale this up and out to other scales. So it really is an idea of pulling things apart and saying that things aren’t so hard on a unit-by-unit level. It’s just the connection that’s very hard, or at least we are not familiar with it.

I said before that we want to understand turbulence as a system so we can talk to it and control it, and we’re getting there. What matters in controlling turbulence is the net gain, the savings minus whatever you put in. If a lot has to be put in to make the turbulence do something that it doesn’t want to do, that reduces the net gain. We’re saying that turbulence is a collection of very efficient amplifiers—if a very small amount of noise is put in on one side, the same thing always comes out the other side—and we ought to be harnessing this natural characteristic for control. The problem boils down to working out which amplifier or set of amplifiers one wants to tweak to get a big change throughout the system. I describe it as finding which pressure points to tickle, just coaxing the turbulence to do something slightly different from what it wants to do without any input, rather than using a big hammer. And we can see how to do that now. When we’re able to use not just the vehicle but the flow around the vehicle as part of the control system, it opens doors to new ways of doing things. It becomes an engineering problem then on how we actually develop and implement a robust control system.

In terms of getting from the lab to practice, this is very much science at this point, so part of the excitement is just being able to explain a little bit about a problem that really wasn’t understood. But part of the power of what we do is that we actually demonstrate these things in the laboratory as well, and the world-leading experimental facilities at the Graduate Aerospace Laboratories (GALCIT) really enable this. Together with my collaborator in the UK, Dr. Ati Sharma from the University of Southampton, who has a background in control, we’re also interacting with Joel A. Tropp, Caltech Professor of Applied and Computational Mathematics, to use state-of-the-art mathematical tools to interrogate and do this modeling. As well we have been working with John Doyle, John G Braun Professor of Control and Dynamical Systems, Electrical Engineering, and Bioengineering, to complete the dynamical systems description of wall turbulence. This ability to operate at the interdisciplinary boundary is unique to Caltech.

As associate director of GALCIT, I believe it’s problems like this that help attract first-class students to Caltech. It is the sort of challenge that drew me, a first-generation college student, away from the dream of flying fast jets in the air force to an academic career interrogating and hopefully mastering the flow over them. It’s an old problem, but one with a potentially very significant societal impact. There’s a chance to really solve something that has baffled us as humans for a very long time, and the way to do that is to sit between disciplines. That’s where we need to be to make real progress. To do so, you need expertise in fluid mechanics and dynamical systems. You need to have some grasp of control, so you can actually use this system description of the flow, and some understanding of materials to know how to modify a surface to control a flow, and you need to have a handle on some applied math techniques so that you know how to do this in the most modern way. You need to be able to reach out to colleagues who have appropriate expertise and frame the problem such that it’s interesting for both sides.

Someone congratulated me recently at a conference for getting tenure and said, What are you going to do now? You can do anything. And I said, Why would I want to do anything else? Caltech has afforded me the opportunity to make an impact on this hard problem. Of course, I have diversified some, but really this is where I want to be. And we’re on a path toward something really meaningful.