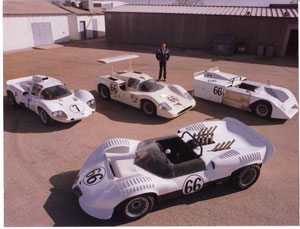 Jim Hall received his Bachelor of Science degree in mechanical engineering from Caltech in 1957. He was also awarded a Caltech Distinguished Alumni award in 2001, which is the highest honor Caltech bestows upon a graduate. Mr. Hall’s record as race-car driver, designer, and constructor includes driving Formula One for the Stirling Moss team in 1963, finishing 12th in the Drivers’ World Championship.

ENGenious: How did you come to study engineering at Caltech?

Hall: My first year at Caltech was in geology, and I found that it didn’t excite me much. I wasn’t interested in memorizing crystal structures. So I changed my major after the first year to mechanical engineering. I wasn’t a wonderful student in high school and I was a little surprised that I got invited to attend Caltech. When I was in high school, the Caltech freshman dean came to interview a fellow who was pretty much the hotshot in our class, and I also got a chance to be interviewed. Interestingly, after my freshman year at Caltech, the same dean called me into his office and said, “Hall, if you don’t pick it up a bit, you may not graduate.”

ENGenious: How did you "pick it up"?

Hall: After my sophomore year, which was kind of a makeup year, I got into the upperclassmen classes in engineering and started to really enjoy school—mechanics and dynamics and materials and thermodynamics. I was interested in engines and how all things worked, and how to make them. My mom used to tell people that whenever it got real quiet around the house, she could go in the boys’ room and undoubtedly Jim would be sitting on the floor with something that he’d found and taken apart. He always took things apart to find out how they worked, but he usually couldn’t put them back together. Obviously, eventually I learned how to put things back together.

ENGenious: How has your Caltech education influenced you?

Hall: It was a fabulous education for me. Caltech treated you as a mature adult, and that fit my personality. As long as you knew where you were going and you got the answer, you didn’t have to run it out to ten places —as long as they understood that you understood. I think my Caltech education helped me tremendously; I learned to do research and to set up a logical method to determine the answer to a question or solve a problem. 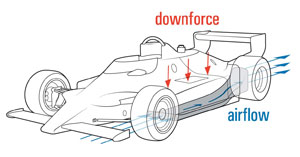 ENGenious: How would you describe your professional life and your contributions?

Hall: I have two professions, one that’s made me a very good living and another one that was my passion. My two brothers and I started an oil and gas business as partners shortly after I graduated from Caltech. Together we have been quite successful as independent oil and gas operators. My older brother, Richard, was also involved in a foreign car dealership in Dallas with Carroll Shelby, the famous race-car driver, and he asked me to help manage it. Dick also got me started in racing. He had purchased an Austin-Healy sports car in the early ’50s, and I got a chance to drive it in races when I was a teenager. After racing as an amateur for a while, I realized that in order to reach the top I needed to do something besides just go out weekends and have fun at it. I got involved in actually building a car because I saw what the other people were doing and I thought I could do as well or maybe better. With partner Hap Sharp, I started a company named Chaparral Cars to design and build racing cars. Within a couple of years, we were very successful. Some of the things that we did changed the whole sport of motor racing. Up until that time, people who designed race-cars thought about aerodynamics as a negative force to deal with. One day it occurred to me that if we have all of this force to deal with, why not use it for something positive? That’s when the light bulb came on. We did a lot of things to change the aerodynamics of racing. The metrics are completely different now, because it’s understood that vertical aerodynamic forces are one of the most significant factors in race-car design.

ENGenious: How have the metrics in racing evolved?

Hall: I started looking at the metrics as a problem to solve. I set up the equations of what the car was doing. I looked at the forces that were involved. I figured out how to measure them, and we set up instrument systems to measure them. If you look at it today, they were very crude systems, but as long as I was careful with my measurements, I could use the data. My first instrumentation was a system to measure vertical suspension deflection under load to document vertical forces on the car at speed. My next instrumentation was a pitot tube and a series of pressure taps on the body. I wanted to make a lot of readings on each test, so I made a manometer that had 20 tubes connected to 20 pressure taps on the body of the car. I snapped a Polaroid camera photo of the manometer at each stabilized air speed. I had to zero it, so the first thing I did was put the static tube into a thermos bottle, take the cap off before making a test run, and then screw it back tight so I could make the run with the static pressure that was there when I started. I’d finish the run, come back in, and make sure that my thermos-bottle pressure hadn’t changed. I knew what the static pressure was at speed because I had it captured. We then checked various positions on the car until we found a good static pressure source and could do away with the thermos. With these two systems, we documented the vertical aerodynamic forces on the cars over a significant speed range and mapped the surface pressure of the car body to help us develop shapes that produced the vertical forces we wanted. During the 1960s we were able to create race cars that produced substantially increased adhesion and predictable driving characteristics over a broad speed range. They proved to be a watershed in race-car design. In modern race-car design, nearly as much time and effort is put into aerodynamic design as into the remainder of the car. We were a team with a few mechanics, a machinist, two fabricators, and a draftsman in some cases. Our team was five or six people initially—it was small, the feedback loop was tight, and we all pulled together. It was a highly successful and satisfying experience.

ENGenious: How does your five member race-car team compare to today’s teams?

Hall: Oh, today in Formula One racing, the teams have 300 members. I think there are 60 engineers on some of these teams.

ENGenious: You described the engineering part with the same excitement as the driving part. 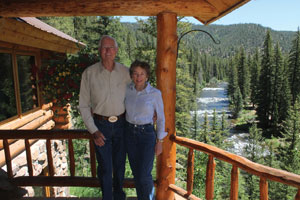 Hall: Some people say I probably never really reached my potential as a driver because I was too interested in the mechanics of it. But I think it was an advantage for me because in American road racing, I was probably the first driver–development engineer on a team. I knew what I wanted and I figured out how to get it. I really enjoyed trying to make a better machine within the constraints—car specifications, budget, time.

ENGenious: What message do you try to get across to young people?

Hall: We have put our cars on exhibit in Midland and we spent a lot of time creating interactive exhibits for youngsters, on the principles involved in the engineering and science of racing. We need to try to help create interest in our younger generations in the sciences and engineering. I wanted to show them how exciting and enjoyable an engineering career can be. A lot of times they’ll ask, Why do you think you were successful? And I say, I think I worked harder than a lot of others. I decided what I was going to do and I worked at it. My wife, Sandy, worked right alongside me a lot. She’d call me up at noon or 1 p.m. and ask, Did you eat lunch? And I might say no, I was doing something else. We used to go home, eat dinner, and then go back to the shop and work until midnight. It rarely seemed like work; I was hungry to learn, and to build better and better machines. Racing is a good model of the free enterprise system—you know what the rules are, there is a short competition cycle to evaluate your product, and you get paid according to how well your product performs. What a satisfying way to live.

ENGenious: Have you had any personal experience with managing water?

Hall: Yes, in a way. I have a mountain home in Colorado in a development that is governed by a homeowners’ association. We realized that there’s only so much good fishing water in Colorado and it’s quite expensive to own. I proposed that we make a diversion of river water to create a fishing stream on this property, and became the manager of the project. It took me ten years to obtain the permits to divert the water because of all the bureaucracy we had to deal with. All we’re doing is taking the water out of the river, keeping it for a while as it flows through our property, and then putting it back in the river. I pretty much designed the way this stream was to be built and oversaw the construction of it. It turned out to be a beautiful and quite good fishing stream. A couple of the homeowners fought the project pretty hard. One said messing with nature was the wrong thing to do.

ENGenious: How did you address the concern?

Hall: I didn’t feel like we were going to destroy a lot of ecology. In fact, I thought we’d probably make more opportunity for the fish and the other animals and plants that thrive off of it to live there. One homeowner was dead set against it. But about a year after we finished, I saw him and said, “I know you were against this stream, but I thought you conducted yourself in a really ethical, gentlemanly way, and I just wanted to tell you I appreciate it.” He just said, “We love it.” I think we ended up with a valuable addition to our property, which enhanced our recreation opportunities with no negative effect on the environment. The association decided to name it Hall’s Run.

ENGenious: Any other memories of Caltech?

Hall: I had a good friend at Caltech that I’ve kept in touch with over the years, Gordon Fullerton. Gordo and I were friends as undergraduate students. We studied together; we hit tennis balls together for exercise and relaxation. We were both interested in aircraft, and we both joined the air ROTC. Gordo enlisted in the air force after graduation and has achieved an outstanding career in aerospace. He became an astronaut and has spent his whole productive life on projects that required great skill and great personal courage. I admire him tremendously.

Hall: I feel really fortunate to have been born an American and to have grown up in our free society where you have the opportunity to do what you choose. If you do it well, you are well compensated and can live your life the way you decide. I worked hard, and I obtained a good education that has been an asset throughout my life. I have always had marvelous support from my family and feel very fortunate. I am a lucky guy.

Jim Hall is a founding partner of Chaparral Cars, Inc., and Condor Operating Company.
Colonel Charles Gordon Fullerton passed away on August 21, 2013, after a long battle to recover from a massive stroke he experienced on December 31, 2009.