The student winners of the 2016 Demetriades - Tsafka - Kokkalis Prizes were announced at a special dinner with the Demetriades - Tsafka – Kokkalis family. Rachel P. Galimidi received the prize in Biotechnology for her work with Professor Pamela Bjorkman aimed to further understand the mechanism of HIV evasion of the humoral immune response. Junle Jiang was the recipient of the prize in Seismo-Engineering, Prediction, and Protection for his work with Nadia Lapusta which used probabilistic inversion tools to understand the deep-ocean trench generated tsunamis that occurred during the subduction-zone earthquakes in Japan and Chile. Yinglu Tang working with Dr. Jeff Snyder received the prize in Environmentally Benign Renewable Energy Sources for her work on thermoelectric skutterudites for mid-temperature applications such as automotive waste heat recovery. The second winner in this category was Changhong Zhao who worked with Professor Steven Low to study the control and optimization of modern electric power systems. The winner of the prize in Nanotechnology was Gustavo Rios whose research involves development of a modular, scalable, nanofabricated neural probe system for dense 3-D electrophysiology to study animal brains. Rio’s graduate advisor was Professor Thanos Siapas. The prize in Entrepreneurship was given to Anton A. Toutov who was advised by Professor Robert Grubbs. His research interests lie in using fundamental chemistry to development radically new, sustainable ways to make everyday chemical products and generate clean energy. 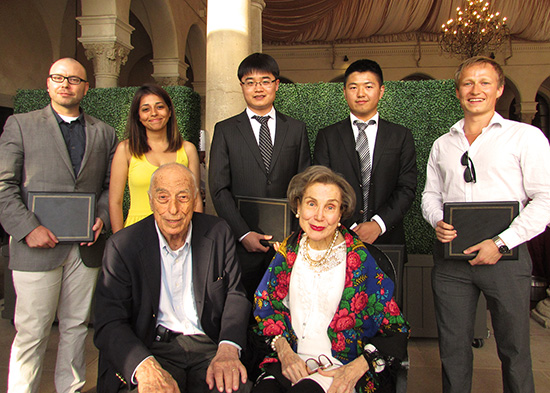