Robots designed and built by undergraduate students battled in head-to-head competition, in this year's ME 72 Engineering Design Contest which was dubbed "The Conquest of Millikan Islands."  Teams had to design and build robots to retrieve 11 ping-pong balls from dispensers on the footbridge and then use a second aquatic robot to put those balls into small "islands" distributed around the pond. Finally, after an afternoon of many fierce rounds, team Robotics Anonymous emerged victorious. [Caltech Feature] [ABC7 News Video] 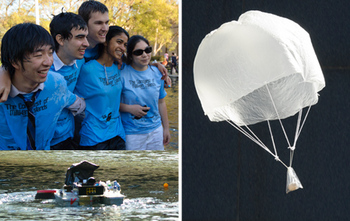